The last 24 hours of my life have been surreal!
Just over 14 years ago when I was told I had MS and that my life was over as I knew it, who would have thought that the doctor was right!  After yesterday, my life as I knew was over all those years ago, because a new life with new opportunities was about to begin.  As I have said before I would never change my diagnosis because it has made me who I am today. 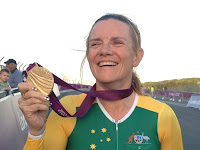 And today I can call myself a Paralympic Gold Medallist!

Never in my wildest dreams did I ever believe I could feel so overwhelmed, excited and proud all in one moment.  My race went exactly as I had planned it, right from the time I woke up, to getting on the bus to Brands Hatch, to my warm up, then my race time.  There were no hiccups at all.  I was starting 6th last with the faster riders behind me.  As I had to race the men as well (this Time Trial was factored, in other words handicapped) I knew that I had to pass some of the riders in front of me but also stay in front of GB Rider David Stone for as long as possible.  All riders start 60 seconds apart and I knew that if I was only 90 seconds slower then the fastest man then I would win this race. 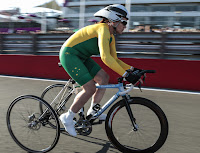 At the start of the race I managed to pass 3 riders within a very short time and just kept thinking about how much I believed in my ability and myself, but also repeating in my head "stay in front of David, stay in front of David".  Where I expected him to catch me didn't eventuate which was fantastic and spurred me on, then out of no where he caught me but not that far from the finish.  I had two hills to conquer and not let him get too far away from me.  Down the finishing straight the noise was incredible with people cheering and pounding on the side boards and all of a sudden it was over. I knew I had given it my all as I had nothing left in the tank.  Now it was a waiting game.  I had no idea what time David had done and there were still riders to come in and good riders, the Italian, American, French and German, all of who could pip me at the post.

I retreated to our garage and proceeded to do my warm down, with members of our team coming up to say they thought I had won.  To be honest I didn't want to believe any of them until the official results were up.  When I was finally told the results were final I had won the Gold, I still didn't believe until a GB staff member came straight through our garage, held out his hand and said to me " absolutely amazing ride, congratulations", when he walked away I burst into tears!  There were hugs all round from the team who had supported me 100%, Peter D, Tom S, Muz L, Peter G, Anouska , Jenni, everyone!  I was able to call Russ my husband and Helen my coach back in Oz (although it was around 3am, I didn't care!) and tell them the good news.  I don't think either of them were able to get back to sleep! 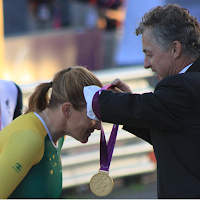 The presentation seems like a dream!  I met up with the other medal winners Han-Peter Durst (GER) who had won Silver and David Stone (GB) who won Bronze and we all hugged one another.  That is the good thing about Paralympic athletes we were happy for one another.  The three of us are also friends through social media and keep in touch, so it was great that the three of us were standing there.  When it was time to stand behind our podium places I must say I was shaking, but I'm not sure if it was because it was very cold or the nerves had set in, probably a bit of both.  But I must say that it is the most unreal feeling hearing your name and moving forward to receive that medal.  My family was only about 10m away and to be able to share this with them was fantastic!  When the anthem played I sang every word, I figured if I didn't I would cry! 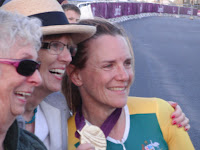 After the presentation I was able to head over to my family and of course that is when the tears started on both sides of the fence I might add. But what a wonderful feeling!

Coming back to the village was amazing as everyone already knew the result and the hugs and congratulations has been never ending.  Being a part of social media has also been overwhelming with hundreds of Facebook messages, tons of Twitter messages (even one from Adam Gilchrist,  that blew me away!) and this morning 65 emails, as well as Telstra Hero Messages!  I have read every one of the messages, responded to all the emails, but have been hard pressed to answer all the other messages, other than the Hero Messages from school kids...those have definitely been answered!  So to those I haven't responded to apologies. Your support has been greatly appreciated.

I now have the Road Race on Saturday, it will be tough to medal as this race is not factored, so it is strictly first across the line.  The men are much stronger over the longer distances, but hell anything can happen!