With everything that has been happening in the world I thought I would write about "Courage".

In the past 6 months, this part of the world has endured fires, floods, cyclones, earthquakes, Tsunami's and radiation scares.  I am sure that a lot of us are wondering when it all might end?

Australians who have been affected by cyclones and floods have that "Can do" attitude.  They have all helped one another by "mucking in", cleaning up and getting on with rebuilding their lives.To me this shows courage, people who have lost everything, helping and thinking of others before themselves.

The people of Christchurch in New Zealand have not only endured one earthquake but two devastating quakes.  The second one in February demolished part of a beautiful city and took almost 200 lives.  But the tough courageous Kiwi's have vowed to rebuild! 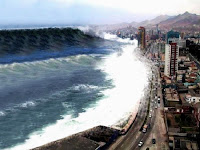 In Japan I watched in horror, through live television, as a Tsunami smashed into coastal towns.  Never had I ever seen water move so fast and wipe out everything in its path.  Not only do the Japanese people have to deal with the after effects of the Tsunami but also the rubble of the earthquake and now dealing with the radiation from the damaged nuclear reactors.  With over 27,000 people missing or dead, the Japanese peole are stoic and courageous beyond belief.
I heard a quote once that stated "Life's challenges are not supposed to paralyse you, they are supposed to help you discover who you are."  Well I don't know about you but these tragedies would have paralysed me!  I guess most of us will never know what we are capable of doing during a crisis until the crisis hits us.
I for one am truly amazed at the courage shown by everone who have been through these terrible situations.  Even more so the courageous men and women who work in the rescue service, who have gone to these devastated areas to help not only resuce, but to also look for and identify the dead.  Toughest job in the world!
The word Courage is defined in the dictionary as "the quality of mind that enables one to encounter difficulties and danger with firmness or without fear: bravery"
Personally I don't think there is any definition worthy of all these courageous people.  I believe they are tougher than courage and other words that spring to mind such as bravery, guts, pluck and valour still don't do them justice either.
So to all those out there who are living, surviving and rebuilding their lives I salute you!  My thoughts, prayers, respect and admiration are with you.
Posted by Carol at 10:35 PM No comments:

It has been a while since my last blog and that has to do with the fact that this time of the year is always very busy for me.  It is regatta season and 24 hour Mega Swim season!  So now that my Mega Swim is over for this year and the regatta season is just about over for the domestic season I thought it was time to put my thoughts down.

Because both of these areas of my life tend to revolve around "Success" I started thinking about what success really is. Regatta's are all about competition and bringing home that bling whether it be gold, silver or bronze.  My Mega Swim is all about raising as much money as we can to help the lives of people living with MS.  But really is this all that success is about?  I don't believe so.

A few weeks ago I attended the New South Wales State Rowing Championships with a new rower and friend of mine Gavin.  It was Gavin's first ever race.  Not bad to have your first ever race at a state championship!  We had to borrow a boat up there for Gavin and the only one we could get was a very skinny racing boat.  A type of boat he had never really been in before. Gavin described it better than I have ever heard it described before.  He said it was like going from rowing a ruler to rowing a toothpick!

Gavin really wanted to win a medal, his first ever!  But he realised that the best success he could have was to finish the race dry.  In other words not to fall in.  Success was what he had, although as he stated he almost fell in about 7 times, but crossed the line dry and to top it off he took home a bronze medal...he got his bit of bling!  His success was more evident when he got home to his two beautiful daughters and they were fighting over who got to take his medal to school for Show and Tell first!

As for me, I knew I would go home with some bling but my success came in the fact that I had closed the gap slightly against my competition who had beaten me last year at Nationals.  At the ripe age of 49 and a few months I had actually taken 4 seconds off her win.  To me that was my success.

Thomas Edison once said "Our greatest weakness lies in giving up".  And giving up is certainly not in Gavin's vocabulary because he was back on the water last weekend at Victoria's State Rowing Championships where he had to row against me, twice.  Once in the single where he said to me at the end "Well this week I only almost fell in twice instead of 7 times like last week!"  Then in the double where he and his partner took the Gold medal convincingly!  Now his daughters don't have to fight over the medals...they can have one each.  Gavin's attitude is his success!  A never say never attitude.

I guess you can say my 24 Hour Mega Swim has had a huge success this year.  With all that has happened in Australia and New Zealand with cyclones, flooding, fires and now the earthquake, people are tired of donating money to causes.  But the participants who take part in the Mega Swim never cease to amaze me with their fundraising abilities.  We are currently sitting just over $258,000.00.  Yes this is success but so is the fact that my friends daughter swam  300 metres when she wasn't sure that she could swim 50 meters!  Or my friend Louise who works for MS Australia who swam just over 14km and raised over $2500 and she just happens to be blind!  I couldn't swim that far with sight!!

So "What is Success"?  I think success comes in all different sizes.  If you can conceive it and believe it, you can achieve it, no matter what level you are looking for.
Posted by Carol at 7:43 PM No comments: