I have had a dream and a goal since the age of 10…to compete at an Olympic Games. I was always mesmerized by the athletes as they marched into the stadium behind the flag of their country and wearing the colours of their country. 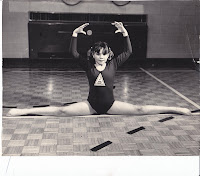 I had always been involved in sport of some kind and at the age of 11 was doing gymnastics and thought that this was the way to go.  That is until a very uncaring woman at a very prominent gymnastics club told me I would never make it as I was too fat!  My best friend at this ripe old age of 11, Sharon, had been invited to join this exclusive club but I was turned away.  I remember being crushed and the feelings of utter devastation that I couldn’t go with her.

But then at the grand age of 12 I started competitive swimming.  I had always been a good swimmer and at my first competition I remember winning my first ribbon.  Actually I still have that first ribbon!  So that was when I decided that I was going to swim for Canada at the Olympics.
It's funny how as children we have no inhibitions and don’t believe that there are any walls in our way.  It is just matter of fact… “I am going to swim at the Olympics”…plain and simple.  So for the next 6 years that is what I did, I swam.  There was nothing I wouldn’t do to make sure I was at training.  I was lucky enough to have very supportive parents and whether they believed I would achieve my goal or not, they never said never!
Unfortunately the Olympic Games that I was targeting was the 1980 Moscow Games and due to political upheaval, the USA decided to boycott these games, so Canada followed right along.  Devastation…my dream was gone!
But determination is a funny thing and with the diagnosis of Multiple Sclerosis I wasn’t going to let life pass me by.  I believe it is your life and your choice and that we must all embrace new opportunities and challenges with confidence and self belief.  I honestly believed that I would make it to the London Paralympics as a rower, but the tide has turned (no pun intended!) and it looks like I am aiming at being a cyclist in London.  My first step in this pursuit is the World Para-cycling Championships in Denmark in September.  If I can medal there, I know I will make it to London.
I am sure that there are some people who must think I am absolutely nuts!  But I believe that you should pursue your dreams at full throttle, you can’t worry about what people think.  With determination and the right attitude you can achieve your goals.  Michelangelo once said “The greatest danger for most of us is not that we aim to high and we miss it, but we aim to low and reach it.”

Determination is the result of desire and it doesn’t matter how mundane your goal might seem to others, if it is important to you, then go for it!  Who would have thought back in 1980 that 32 years later that dream would be just about to come true?
Remember, you’re never too old to make dreams come true.  I am living proof of that!
Posted by Carol at 2:49 PM 1 comment:

The other day I was at Latrobe University speaking with Physiotherapy students.  We were discussing communication between patients and clinicians and how to get patients motivated.  One of them asked me a question…”Why is it that you are so motivated?”
This question got me thinking and I had a really hard look at myself.  At first I didn’t know the answer but the more I thought about it the more I realized that I am motivated by fear.  Yes Fear!
But what is it that I am afraid of?  There are a couple of different things, the fear of not doing something to the best of my ability and the fear of my MS getting worse.
Fear is a primitive emotion and it causes us to obsess over even the littlest things.  I know that no one is perfect, but if I am going to do something then I want to do it to the best of my ability.  I am motivated not by ruthless determination to the tasks I undertake, but by the fear that I will fail at them.
Then of course there is Multiple Sclerosis.  I think that the worst thing about having MS is the unpredictability of the disease.  It creates a world of never-ending uncertainty.  I think that subconsciously I push myself to my limits because of the fear of not being able to do the things that I do, in the future.  I want to be able to accomplish my goals before I’m not able to.  I am not saying that my MS will get worse, no one can tell me that, but it is the fear of the unknown and what can happen.
So is it bad to have fear to keep me motivated?  I really can’t answer that question right now.  Maybe I need to realize that by continuing to strive to my best potential that I am actually overcoming that fear.  I don’t want to believe that all my motivation is driven by fear and maybe I am slowly overcoming this.
Nelson Mandela once said “I learned that courage was not the absence of fear, but the triumph over it. The brave man is not he who does not feel afraid, but he who conquers that fear."
One day maybe I will be able to say that my motivation comes from the conquering of that fear.  But until then I will continue to do what I do because of it.
So what motivates you?
Posted by Carol at 1:42 PM 2 comments: