Today I was taken over to the ABC's studios which are located in a HUGE massive building the size of two football fields.  This is the same building that housed all the media from around the world for the Olympics. I was escorted by the Australian Media staff to do a live stint on ABC2's evening show.  The panel is hosted by Stephanie Brantz (known as the walking sports encyclopedia) with her side kicks being comedians Lawrence Mooney, Sam Pang and Adam Zwar.

I was taken through enormous security (actually there is enormous security everywhere) to makeup.  For those who know me I don't wear a lot of makeup but it is always nice to have a professional pamper you with makeup and hair. 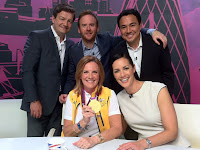 I was warned that the guys would try to be funny and that they had a lot of background information about me.  To say I had fun is an understatement! I think I gave back as good as they threw!  But in all seriousness they were fantastic and asked about my crash in August and then even showed footage of me racing down one of the biggest hills on the course.  I had never seen this so it was amazing watching me tackle the hill!

Towards the end Stephanie told me to look straight down at the camera and send a message to Russ.  She could have warned me as it took me off guard and my brain ran at 1000miles an hour to think of what to say.  In the end I just waved, said "hi honey, I'm heading out to get one more tomorrow", then gave him the thumbs up.  Sounds kind of dorky right? Well it was!

When I left the studio and grabbed my stuff, my mobile went nuts with text messages and the first one was from Russ, telling me that I had made him cry!  And I thought I was dorky!

It was a lot of fun and my first dealings with the media as a Gold Medallist!
Posted by Carol at 6:09 AM