I subscribe to a website called Simple Truths and a couple of days ago I received an email called "One Choice".  The first line hit me like a ton of bricks, it was " Think about this for a moment...one choice, just one, can change your life forever."   Boy how true is that statement!!!

Life can be funny, for the last 5 years I have been training my butt off rowing.  My ultimate goal, London Paralympics 2012.  It had been Beijing in 2008 but unfortunately our crew missed out on a spot by about 0.8 seconds.  I initially thought that dream was over but decided to take it one year at a time.  As I got better at my chosen sport and made it to World Championship level in 2009 where our crew came 6th, I realized that my dream just might possibly come true.  Just to represent my country at that level would be amazing.  As a child I dreamed of representing Canada at the Olympics as a swimmer, but this dream also didn't come true, not for lack of trying but because of politics.  So I have continued to push my body to do things that I never thought I could accomplish and I have had some amazing people to help me along the way.

Unfortunately during the past year and a half there have been a number of things that have stood in my way and even though I believe that we can still get a crew together to get there, there are certain people who do not!  So in January I purchased a racing Trike and started using it as cross training to get to rowing.  Little did I know that this "One Choice" would be a turning point in my sporting career!

Every April in Australia, rowing selection trials are held for the World Championships and once again the rowers who had nominated in my category were denied the chance to attend.  So I decided to compete in the Australian Para-cycling Championships on the Sunshine Coast in Queensland.  I entered the Time Trial and the Road Race.  But yes...I am the only classified female Trike rider in Australia!  This was no deterent to me as Cycling Australia had speed times listed on their website in order to qualify for the Australian Team.  So I set my goals to not only make this speed but smash it!  Which is what I was able to do.

The Time Trial is something you do on your own against the clock but in the Road Race I at least had the male Trike rider to race against and what a race it was!  At the start Stephen, the other rider, took off and I thought that I would be left for dead.  Lucky for me I am a competitive person because I was able to catch up to him and the fact that my Trike is 22 kg's and his was 14 kg's I was able to absolutely blow by him on the downhills!  He kept catching me on the uphill and the race was on.  We had to complete two laps and this leap frogging continued throughout the entire race.  On the last lap, at the last corner, he took off and it was at that time that I thought he had been holding out on me!  But again as I saw the 1km to go mark I decided that the race was not over and I managed to catch him.  The last 400m was a sprint to the finish and in the end I was able to get him by a wheel, in fact 1 second! 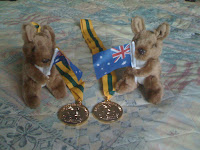 Even though I was the only female I was still awarded with medals to celebrate my success.

The best thing is that I was able to smash the qualifying speed set by Cycling Australia and the sweetest email I received on Monday was that I had been named to the Australian Team for the Para-cycling World Cup in Sydney in May!

So that "One Choice" to purchase that Trike and take part in the racing has probably changed my life!  That goal of getting to London is looking better all the time!

I still love rowing and will continue with that pursuit as well.  I am giving myself two chances because I will not let my dream die!

So what changes to you want to make in your life?  Remember that you are always "One Choice" away from changing your life!
Posted by Carol at 6:25 PM